how to get evicted from a storage unit.

i don’t know it was the fact that i was dressed like an oompa loompa. or if it was the fort we built around our camera gear. or perhaps rainn wilson thwarting his low-carb diet as he polished off a stack of 10 pancakes whilst cycling on a stationary exercise bike from the 70s, but SOMEHOW we drew attention to ourselves today at our storage unit. and then we got royally told off. and then we were told to expect an eviction notice in the mail.

considering that we were paying $200 a month for this little cube of cement space we didn’t think it was a huge deal to shoot a quick promo in there. but i guess it is a big deal because according to the manager of the facility you are only allowed to STORE things in a storage unit. no filming. no photography. definitely no pancake eating or oompa loompa activity allowed.

(in my defense, i was supposed to be playing the role of a ‘mover’ and so i’d purchased these white movers overalls, but the only size available was extra large. and thus, the crotch hung down at my knees and that’s why i resembled an oompa loompa)

so now we have a week to figure out where to relocate all the SoulPancake props and all of our furniture. which leads me to some happy news:

it’s located in the silverlake area just a few miles from the reservoir and some of my favorite eateries. it has 2 bedrooms, and has not one, but THREE, little outdoor areas. that’s three places where i can go outside, curl up on a chair and pretend i’m not in LA. it’s a spanish style duplex which means awesome high ceilings, charming little porticos in the cement walls, and nooks that you have no idea the purpose of, which is perfect for someone like me who always needs a nook to cram a bunch of analog cameras. and it has a garage where we can store all these crazy props from our productions.

we’ve sent in our application but we’re still looking at other options while we wait just.in.case. something else shows up or we don’t get the apartment.

in other happy news, it was ash’s birthday yesterday so a bunch of us had dinner at cowboys and turbans (think indian food smashed together with mexican food). it was a lovely night under trees and bare bulbs, celebrating one of the best of the best.

OH and her sweet friend, melody, made her this amazing cake which is basically a bunch of cake pops chilling on a MOUNTAIN of sour patch kids. if there was ever a cake that summed up ashley ludwin this would be it. 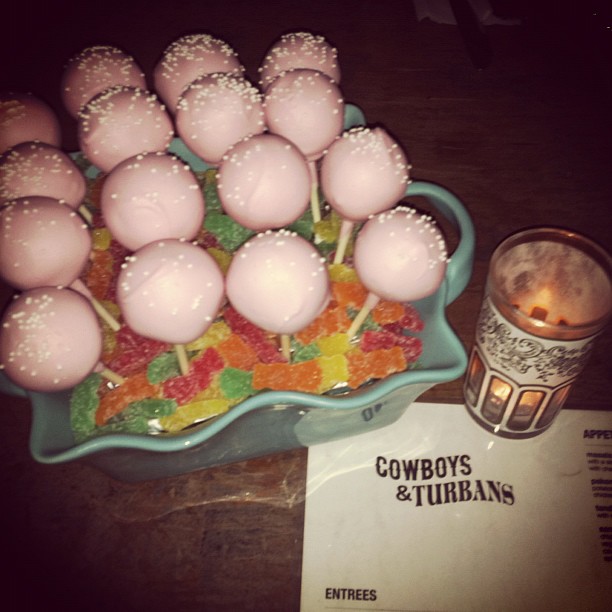 1 comment on “how to get evicted from a storage unit.”