it’s not often that i’m super vulnerable in this blogosphere anymore, i have other outlets for deliberating on the things that are weighing on my mind. and one of those outlets has scruffy hair and gives me giant spontaneous hugs that make everything a whole lot better. so more often than not, my blog has become a place for storing pretty things and pictures of our adventures along the way. but sometimes, i’ll feel like sharing something that’s resting heavy on my heart terrain and today is one of those times. consider yourselves warned. :)

sidenote 1: there’s always mallory’s awesome blog if you would rather spend your time looking at lovely things.

sidenote 2: i want to be mallory’s friend in real life.

so, i think it’s fair to say that for the most part, we all want to be liked. i know that some people think being elusive, apathetic and dismissive is the way to go, but at the end of the day, when you’re brushing your teeth and debating about whether you have the energy to floss, the person staring back at you hopes the people they surround themselves with, and the newcomers they meet along the way think they’re decent. right?

i’ve also always been a champion of authentic friendships. any sort of rift, competition, or contention gets under my skin and makes me uneasy. which is why i’m a bit jolted (?) when i learn that someone feels like they’re in competition with me, or has some grudge or grievance against me. this would be less of an issue if those assertions were open and forthright. but the insidious ‘words in passing’ where you tell a close friend of mine your bizarre list of grievances with me? err, sorry, this falls in the category of: not ok.

and what’s sort of bemusing, if it wasn’t so insanely wacko, is the kinds of things i’m being faulted for. here’s a little taste: i’m too happy, far too lucky, i get too many opportunities too easily. i get to do what i love. i found love too effortlessly. moving to LA was too convenient for me. i don’t seem to get my share of the harsh realities of life.

and it’s at this point, i want to exclaim a hearty: WTF?!

it’s fascinating to some degree that people who i’ve never even had coffee with, would make assumptions like this. and based off what exactly? my twitter feed? my facebook status? the fact that i smile in photos? or stop.the.presses, seem happy and grateful with my lot?

yesterday, a close friend reminded me that i can’t control other people’s reactions. and that many times, those reactions have nothing to do with me. she also expressed that as i come into my own, others who feel lost/disenchanted with their path, may resent me. and here’s the kicker…supposedly, i need to learn to be ok with this. #eek #lifelesson

the way i see it, we all have the choice to move forward in life and shine brightly. and along the way we might encounter people who are uncomfortable with that especially if you show up from a place of authenticity and happiness. i guess what i’m learning is that i don’t need to remedy their discomfort or shine any less brightly. there’s space for us all on this pretty planet, so my wish (since i OBVIOUSLY have a full time genie that grants all my wishes) is that we all be a bit kinder and gentler with each other, and to those fringe-friends (i like to call ‘em) who we don’t really know. because frankly the road for each of us windy and uphill at times and we’re all figuring it out as best we can.

i think these are male/female bathroom doors. and i think they are aweseome. spied here. 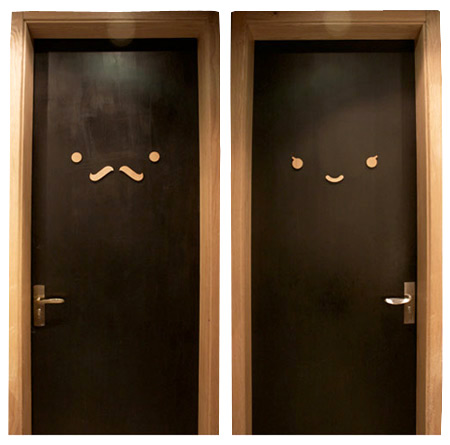