today is my birthday. as opposed to that one time when i faked it. 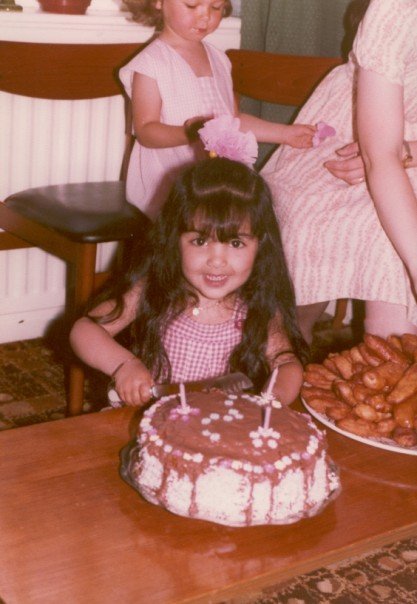 so here i am, at my 3rd birthday party. my hair today is just as long as it was in this photo, i still love patterned dresses and i still wield giant knives with little to no regard for danger. so basically, nothing much has changed.

even though this picture looks like the quintessential birthday photo, i have a bit of an odd relationship with birthdays. the thing is, my parents never really made a big deal out of birthdays. it’s not that they were anti-birthdays but they were just anti-extravagance, so on our birthdays we’d get our favorite meal and a nice gift, and maybe a few friends over, but there wasn’t much hoopla. or dramatics. no fireworks displays or gigantic lead up. this is probably a very sensible approach to birthdays, but as a kid you don’t want sensible. you want piles of sugary treats and magic shows and pony rides. you want want festivities and glittery party invitations that you hand out ceremoniously. and let’s be honest, you want presents. piles and piles of presents.

at a young age it was not lost on me that other kids were having much more exciting birthdays and i soon became jealous. and that’s when i decided to take matters into my own hands. one day (i was about six years old), i went to school and as we all sat around coloring with crayons, i dramatically informed my peers in hushed tones that my parents did not believe in birthdays.

being the theatrical child i was, i might have even feigned a tear to gently roll down my cheek.

my friends looked at me with grave concern. their eyes wide open in shock.

telling my friends that my parents didn’t believe in birthdays basically made them out to be the worst kind of people. like unicorn slayers. or princess kidnappers. and my classmates were appalled.

yes, i continued, it was a terrible tragedy because since my parents didn’t believe in birthdays, i didn’t get to have parties. and what’s worse than no party?

i had their attention now and so i waited for the dramatic pause to kick in.

my friends put down their crayons. this was now serious.

i then pronounced with absolute sincerity, that today, was in fact, my birthday.

my friends then jumped into a frenzy of excited screams and hugs and soon enough, the whole class was making me birthday cards. the teacher made everyone sing happy birthday and i just sat there and gobbled up the attention with a spoon. so what if it wasn’t my birthday, this is how it felt to have a fuss made over me and i loved it! MORE HOOPLA WITH A SIDE OF HOOPLA please.

what i wasn’t prepared for was the turn of events after school.

there i was, home with my mum and baby brother, when there was a knock at the door. my mum opened the door to find an army of little girls, all in party dresses, bows in their hair, gifts in their arms, being offered up by their mothers. and while the mother’s mouths smiled and said “we’re here to wish golriz a happy birthday!”, their eyes shot looks of disapproval. i mean, what kind of abject parent doesn’t celebrate birthdays?

so basically my friends had gone home, told their parents it was my birthday and since the law of a child’s universe demands that on your birthday you have a party, they decided to show up for a party.

my mum had no choice but to throw a birthday party. somehow she created a cake out of whatever she had in the pantry and made up some games on the spot. all i cared about was all the presents.

and now we fast-forward to today where from the moment i woke up i have been engulfed in sweet birthday messages and calls. and even though all the attention makes me a bit uncomfortable, the six-year-old me wants to run around screaming THANK YOU FOR MAKING A BIG DEAL OUT OF MY BIRTHDAY! and the adult me just feels so incredibly grateful to have all of you in my life.

11 comments on “today is my birthday. as opposed to that one time when i faked it.”