truth be told, i don’t really know what a ‘meme’ is.

but i do know what wikipedia is, so let’s draw on it’s wealth of knowledge:

A memetag (or meme tag) is a blog tag that is included in all posts that reference a meme. When a meme is started on a blog — for example, ‘your top five favourite movies’ — the meme tag is included at the foot of the text of each post that responds to the meme invitation.
By including a memetag, bloggers are recognising the initial creator of the meme and allowing them to track how their meme has spread across the blogosphere through the use of social media tools such as Technorati.
While inclusion of a memetag is not mandatory, it is done in the spirit of information sharing across the web and is a system based on trust.

okay. well i’m still uncertain. but i’ve been tagged by lovely leila so here are seven random/weird facts about myself. (if i have completely missed the point of a meme feel free to tell me).

1. it really irks me when people dot their ‘i’s with circles. in fact, i think i once stopped being penpals with a girl who started incorporating this into her penmanship.

2. on the 8th of august, 1988, my mum braided my hair into eight french-braids and 88 tiny braids. we went to the children’s library in timaru and there was this contest where the 8, 18th, 88th person who walked in would receive a prize. i basically begged the librarians for a prize because, hello! check out the hair! do you see the 8 theme i have happening here?

i received a pencil sharpener shaped like a duck. it was a pretty lame prize if you ask me.

3. i love to walk. i love cities that embrace pedestrianism. if you walk with me prepare to walk fast to keep up. but i will love you for it.

4. i once lived in a flat in dunedin with two guys who 1) converted my bed permanantly into a skateboarding ramp, 2) put my mail in the freezer for months on end 3) wired my flatmate’s ‘tickle me elmo’ voicebox into our doorbell so every time it rang elmo’s grating giggle would peal through the flat.

5. i used to spell my last name wrong until i was about seven : khozouei (i would mix up the e and i at the end)

6. in july 2006 i had to convince a hotel manager in lahore, pakistan that i (and the film crew i was with) was not a threat to Pakistani intelligence. the next day we took the first train out of there to Delhi, India.

7. i still remember the mneumonic we had to learn in order to memorize the first part of the periodic table.

knowing the periodic table has not yet proved useful in my life. 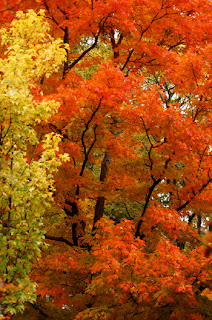 it’s autumn in tennessee (yes, ‘fall’, m2) and it is beautiful. trees in hues of crimson, amber and rust. it is spectacular and i can’t stop taking pictures. this leads me to my new ‘want’. a real camera. i have a slick little digital that i take everywhere, but i want a clunky REAL camera. the one that you actually need to understand in order to operate.

marabeth cleaned out her closet last night. here is what we learned:

1. when the girl says ‘do you think i can snaz this up with some fun earrings?’ this is code for ‘this top is so awful that the only way to detract from it’s awfulness is to wear oversized glittery earrings that draw the attention away’. the answer is always, emphatically, NO.

2. she uses the excuse ‘but it’s for sleeping in’ (insert massive DOE eyes with batty eyelashes here) whenever she can’t bear to part with something. the things marabeth may or may not, be sleeping in, range from structured jackets to long jean skirts.

3. when something has shrunk in the dryer to become a ‘crop top’ it’s best to just chalk it up to a lesson learned and throw said item away immediately

4. that the bronze cowboy shirt was probably never a good idea

5. no one needs even ONE pair of bicycle shorts.

3 comments on “leila meme’d me”