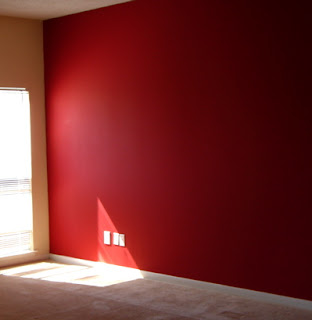 a year ago we moved into this apartment. it had a dark red accent wall and we were both smitten by the sunroom which was effectively a ‘tree house’ as it jutted out from the apartment into a canopy of trees. the living area was spacious which was important to us as we imagined having lots of friends over, forecasting a multitude of dinner parties and games nights. it was all coming together. and then it all fell apart.

one day i came home to boxes. stacked neatly in the living room. walls were suddenly barren. bookshelves held the meager remains of a collection halved.

the space suddenly seemed far too large and overwhelming. i rattled around in empty rooms and spent a greater portion of the weekends in the tree house with a blanket wrapped around me. i’d take a book but i didn’t have the concentration span to read. i’d sit for hours looking out over tree tops and wondering what i was supposed to do. where was the manual for mending? how was i going to fix something seemingly damaged beyond repair?

it was spring then as it is spring here again now. the tennessee trees were lush. the sun found a way to shine through all the shutters that i’d closed and within a matter of days i shook off my self-imposed solitude, took a deep breath and re-entered the world.

i will never forget how it felt to leave my apartment in a probably-too-short-summer-dress and go grocery shopping. to stand in those aisles and only have to tend for one. it must seem strange to you that supermarket shopping was such a pivotal moment for me. but it was. strangely liberating.

the apartment was still too large. doors to rooms would remain shut and with no tv and no other voices, i craved sound. one of my first purchases was a sleek black bose ipod dock and an even sleeker black 80gig ipod to match. music became my solace.

on my birthday some of my dearest friends in nashville took me out for brunch at marche – a french cafe in east nashville that by now you should be familiar with, because i reference it in, oh, every second post. that same weekend m2 moved in and from that moment on my apartment was filled with laughter and two girls whose sleep schedule was non existent. staying up until 3am and showing up at CAA the next morning with wet hair and not-enough-sleep-hysterics was all i remember about june/july/august.

in september marabeth moved in and much needed balance and routine entered my world. real dinners, at least 7 hours sleep and a fridge stocked with fruits and vegetables. i don’t know what m2 and i subsisted on but i’m pretty sure we lived off pb&j sandwiches and magic bullet smoothies for the entire summer.

i remember coming home the day maz had moved in and seeing her room. it was so perfectly put together and decorated that it looked like she had been there for years. i had never really felt like this was my place so the rest of the apartment had a style you would call ‘minimalistic’ at best. nothing on the walls. no cosy nooks. my bedroom was literally a bed and a small set of drawers filled with art supplies. my clothes were either hanging in my enormous wardrobe or folded in little piles on the ground. it always looked like i had just moved in that day. and i had no desire to do anything about it.

which brings me to this weekend. we’ve spent most of it packing. there are boxes everywhere and it still amazes me how much ‘stuff’ one can amass. on tuesday everything will be moved into the new place and so tomorrow night will be the last night here.

in such a short span of time – only a year – this space holds so many memories. henry looking out the windows trying to spy a squirrel. m2 and jc dancing in the living room awkwardly, but adorably, after their first lesson. sitting at the table with them eating havarti cheese and crackers. my first devotional with so many people showing up there was not enough seating. the lady upstairs ‘shhh-ing’ us. marabeth and i lying on the carpet laughing so hard we could not breathe – which happens on a daily basis.

and now i’m ready to close one door and open a new one. literally.