two people i love both had birthdays recently.
one being my mum.
and one being nina mcsweeney.

my mum’s birthday is the 18th or the 20th or the 22nd. it depends on whether you go by her passport, or her birth certificate or what my grandmother says. i don’t know why there is so much ambiguity about it but this comes in handy when you forget the exact date because as long as you remember it’s sometime near the end of august you can’t go wrong. so happy birthday mum. oh and remember the time that i wanted a party and you said that birthdays promoted materialism so you wouldn’t let me have one, and then you called all my friends the DAY OF my birthday and invited them over so they wouldn’t have time to get me presents? yeah…i still haven’t forgotten that crafty move. 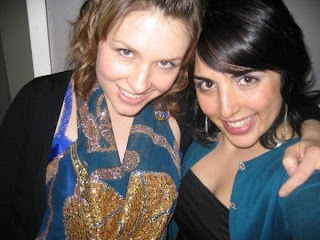 and nina’s birthday was on the 18th.

i could write an epic about nina. she is talented. hilarious. beautiful. and so much fun. you cannot be around her and not be having an adventure of some sort. it’s impossible. we first met when i was about 14. i went to a summer camp and the boy that i had a crush on, had a crush on her. it was a travesty of epic proportions. i decided to ruin her life. or at least her first two days of camp. but then on day three i realized that she was great. and way more fun than the boy i was torn up about. so i got over the fact that she had stolen the limelight and we became fast friends and to this day she is one of my favorite people on this planet.

we don’t see enough of each other due to the fact that i can’t sit still and flights to nz are not cheap but she is one of those people that i miss constantly and when we are together it is like no time has passed and we pick up where we left off.