so many things on a monday

1. according to the powers of the mighty randomizer the winner of vivika’s lovely little dinosaur is commenter number #1: ashley. yay! thank you to all of you who entered this giveaway – the names you came up with were so awesome. if i was Oprah i would give you all dinosaurs. it would go something like this: you get a dinosaur! you get a dinsosaur! and so on. #anotherreasonineedtobeOprah

2. last week dev and i road-tripped up to sulky san francisco for a friend’s graduation – since it’s NEVER warm and sunny in SF i’ve decided that the city has a sulky temperament. i guess it’s more correct to say that i have a sulky temperament when the sun is not out. but i don’t care about correctness. what i care about is wearing sunshine yellow pants and not feeling like the odd one out amongst the throngs of northface jacket wearers.

3. number 2 is why my blogging was so sporadic last week. it was because i was away from my laptop having an actual life. it was a really fun escapade. except for the being.cold.all.the.time part.

4. here are some photos that sum up the trip and my painful wardrobe under-preparedness.

first: the berkley graduate. maxwell smarter-than-all-of-us alinikoff. he is the guy in the cap and gown. OH WAIT. he forgot to wear his cap and gown. yep, the only one out of hundreds of grads. but did he care? no siree. he sat in that auditorium like orlando bloom (to quote dev) and so he’s the guy whose shoulder dev is growing out of.

note my summer pants of impropriety. 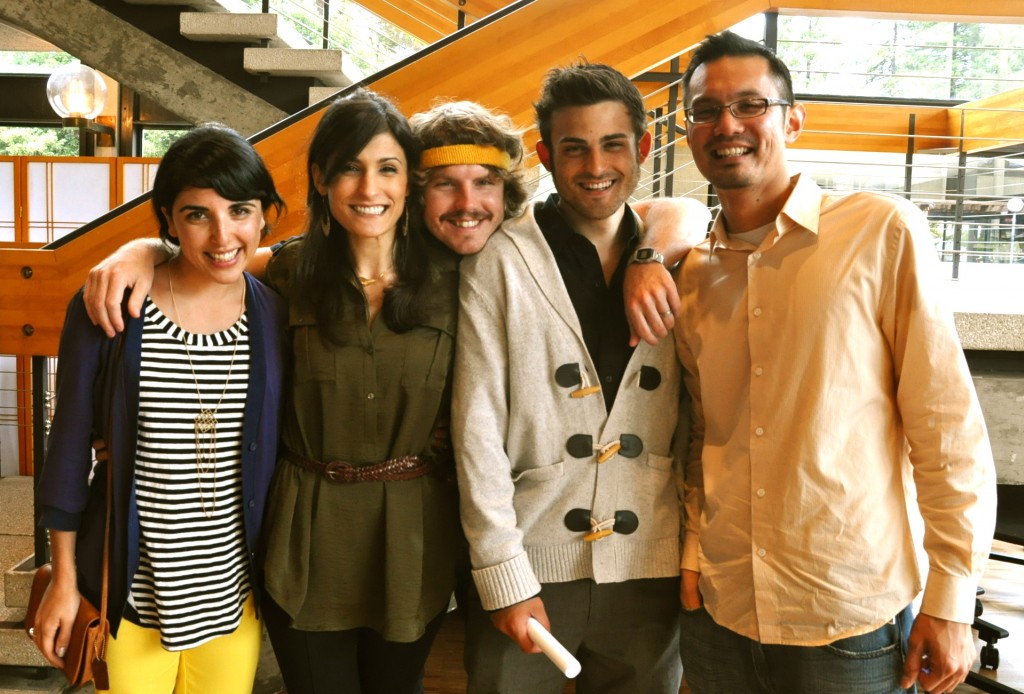 here’s the graduate again looking suave. minutes later he unbuttoned his shirt and showed us all his striped tank. the boy has style.

after a family consultation about what he should do with his life the consensus was MARRY RICH. 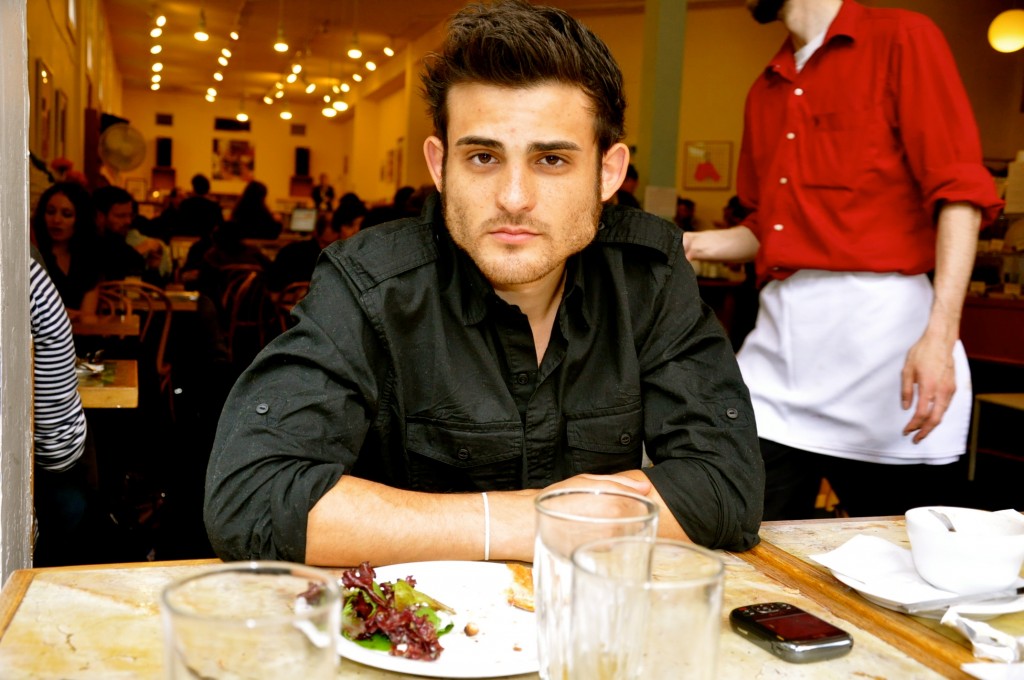 here are dev and elizabeth. as in, my two soul mates. naturally, we couldn’t resist this. e gets extra points for her pelvic thrust and blue steel stare. 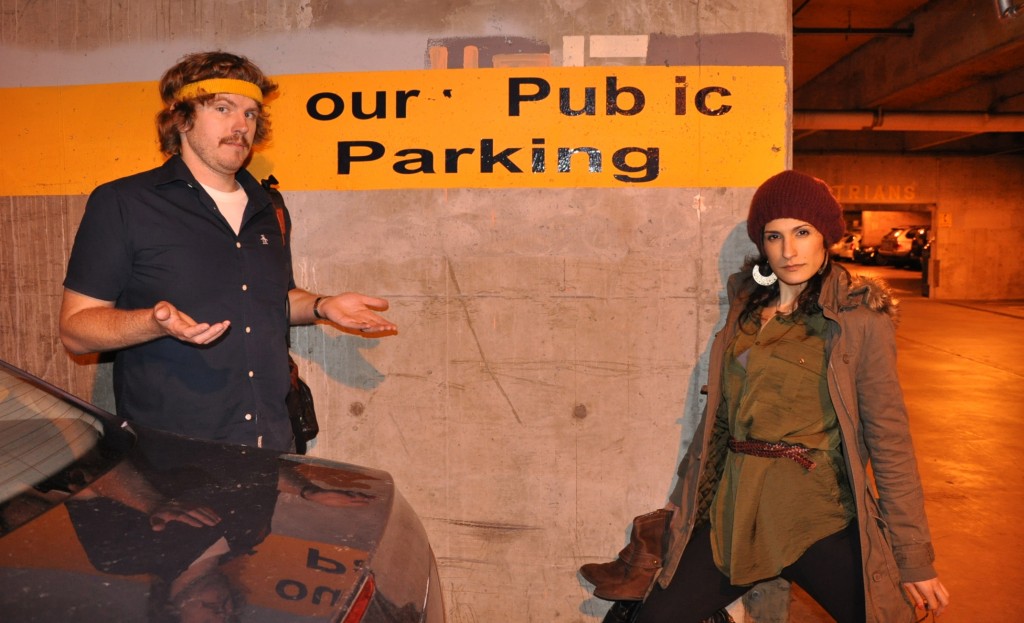 we tried to wear as many layers as possible to combat the cold. 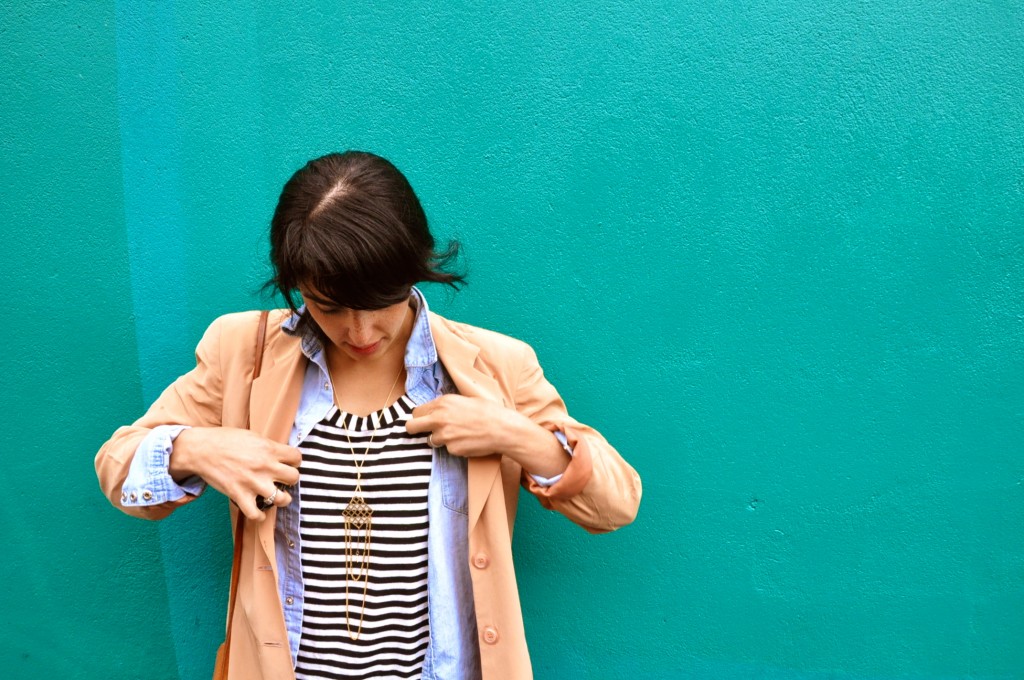 we took pictures in front of brightly colored walls. of course. 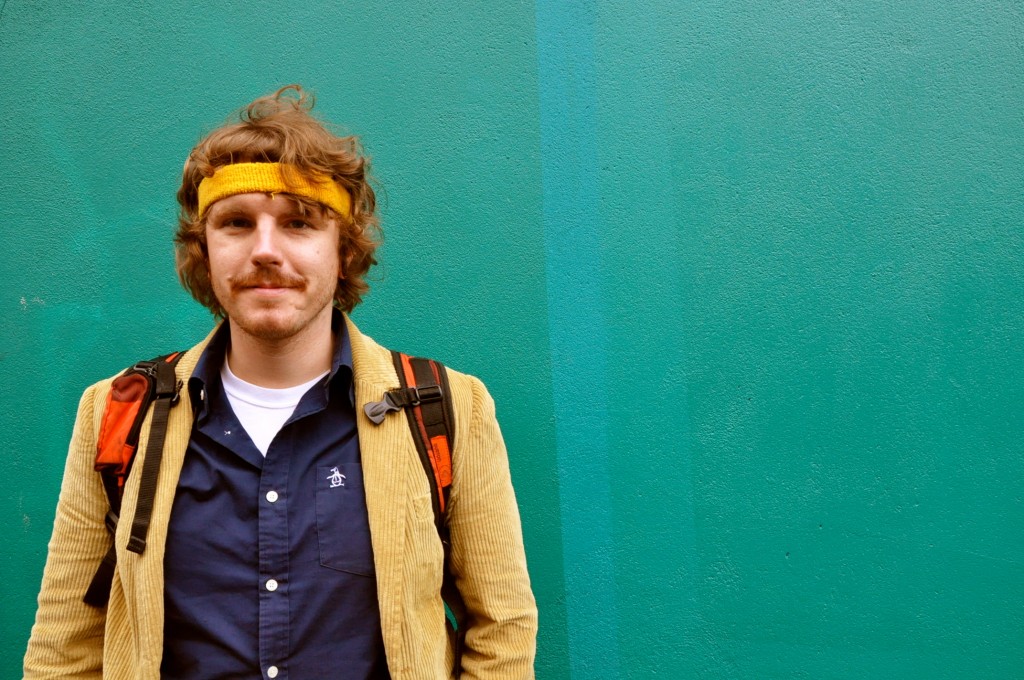 and somehow we ended up in the seediest part of san fran. and nearly went into a peep show just to escape the bleak rain.

notice how elizabeth-from-seattle understands cold climes and thus has encased her head in fur. yet she is still cold – note the pained expression. screw you SF. 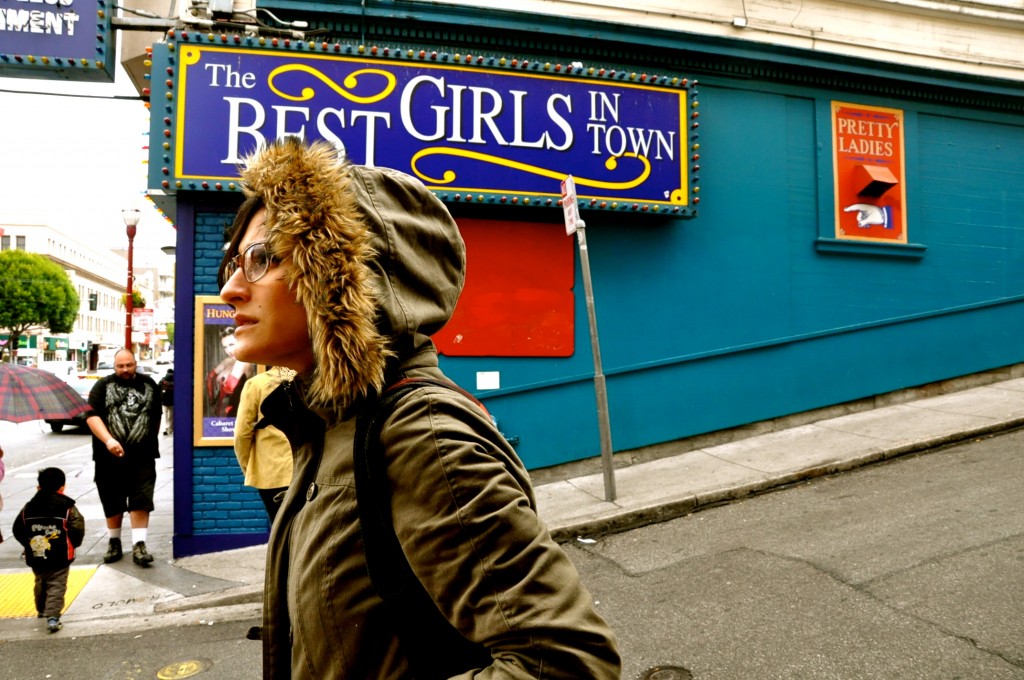 while we waited for the rest of the family, dev took over the world with his laptop. and elizabeth was suitably unimpressed. 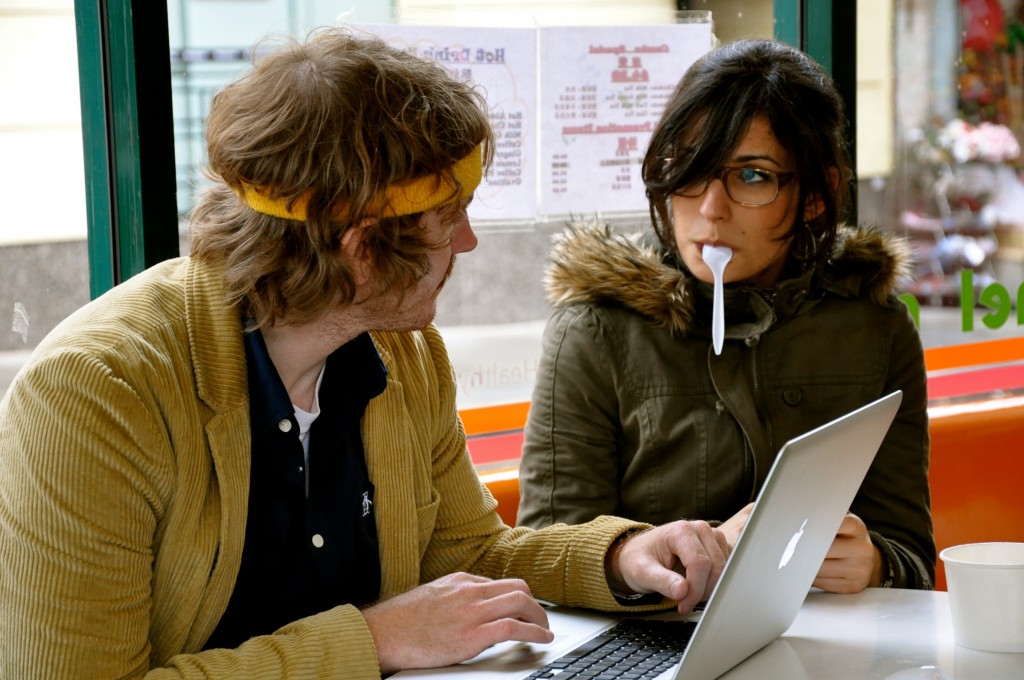 then we ate a whole bunch of good food of which i didn’t take photos of because when food arrives i eat. and there isn’t even a pause long enough to take a photo.

and then we read books. 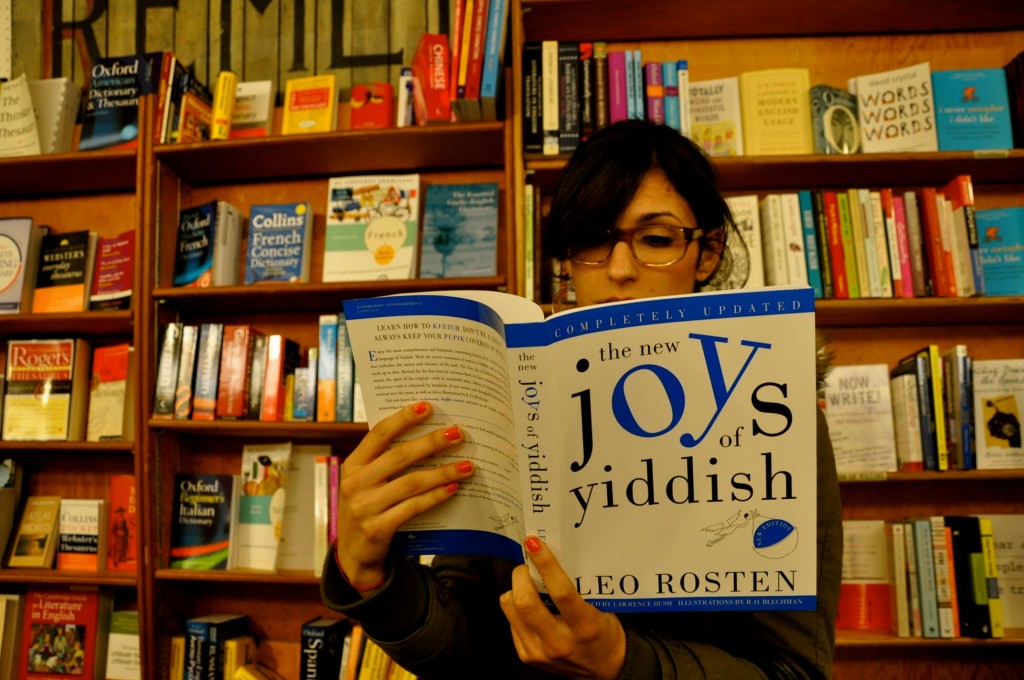 including one of the saddest, yet most interesting concepts for a books i’ve ever come across – a book describing colors to people who are sight-impaired. it was all in braille and every page was black, but the descriptions were beautiful. 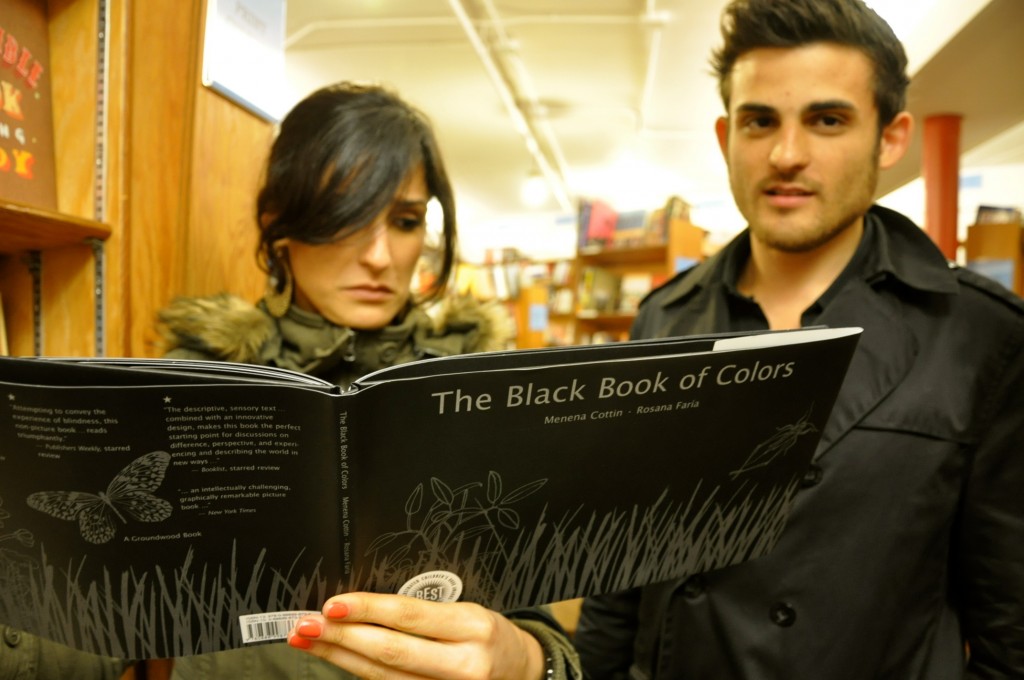 our trip was a blast. there is so much to write about but i’m waiting for e to blog about it. because she has family immunity where she can write about her family antics without getting into much trouble. i on the other hand, want to remain on cindy’s (her mum’s) good side. 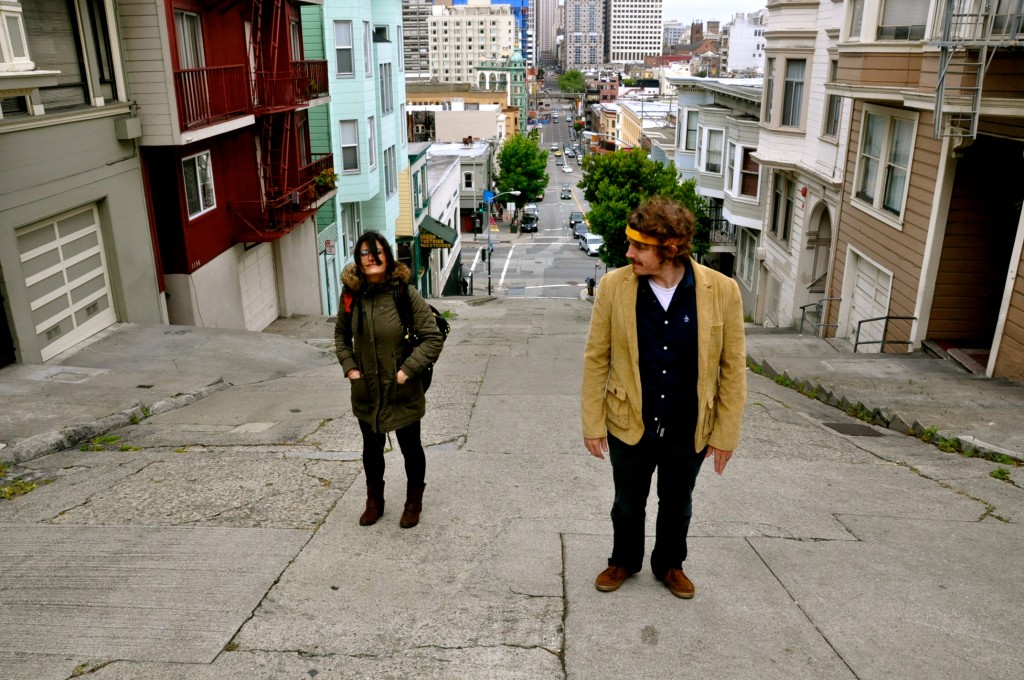 3 comments on “so many things on a monday”